You know that excited, almost electric feeling that’s in the air right before a summer storm on the Highveld? Like every atom and molecule is abuzz with activity, like the very air around you is alive?
Well, I can tell you in no uncertain terms that this was the kind of atmosphere around the CENTURION office earlier today as we prepared to announce the release of Photon– our brand new infrared gate safety beams with a wireless transmitter.

Photon officially became available for purchase from CENTURION and its agents on Valentine’s Day, 14 February 2013, a day that will go down in history as the day that automated gate safety became easy. 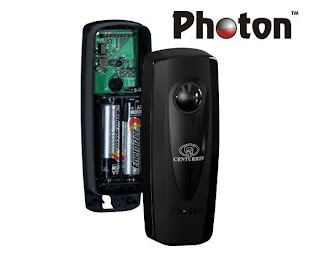 But before we go into what makes Photon so awesome(and trust us, it is AWESOME), let’s have a recap of why you need gate safety beams installed in the first place. Think of it as Gate Safety 101.

It’s quite simple, really: You wouldn’t drive your car without wearing a safety belt (we hope not, at least), and you won’t jump out of a plane without a parachute, so it stands to reason that you shouldn’t let your automated gate run without putting some measure of safety in place, either. As we have stated in many previous articles and posts, an automated gate – wonderful and convenient as it may be – is still a mechanical system and as such carries with it the risks normally associated with moving parts.

Infrared beams have been found to be the most effective means of protecting against crushing, dragging and shearing in an automated gate setup. They are relatively inexpensive and are for the most part reliable but, due to the high cost of installing them – a result of having to route metres of cable, often under driveways – many installations have thus far simply gone without. It is also understandable to a degree that many homeowners would be hesitant to have their driveways defaced for this purpose.

That’s where Photon comes in.

As mentioned before, Photon has a wireless transmitter so the only wiring necessary is from the receiver to the gate motor and, with the receiver traditionally being mounted closest to the motor, no digging or tunnelling is required. As Photon’s slogan declares: Simply attach, align and you’re away!

Photon also boasts brand spanking new operating features such as Installer Mode: a Mode of Operation that makes the installer’s life that much easier by providing a 4KHz tone once alignment of the beams is obtained, taking all the guesswork out of installing beams.

Then there’s also Open Collector Mode, a feature tailor-made for sites where power draw is a factor (think solar powered installations). In this mode, the receiver relay is disabled and switching is done via a transistor, bringing the overall power consumption on the receiver’s side down by about half.

This really is just a superb product. I recommend getting yours now! Contact your local CENTURION agent or visit the Photonproduct page for more info.