The so-called Information Age has meant massive changes in virtually every aspect of our lives: from the way in which we communicate to the way in which we consume information. By the second half of the 20th century, every interface was undergoing a dramatic facelift and becoming slimmer, lighter and, above all else, smarter, embracing the Brave New World that the techno-prophets and digital pioneers in Silicon Valley promised. CDs were being replaced with iPods, CRT with flat screen and dial-up with fibre, and all over the world the citizens of this planet were experiencing a connectedness that had never before been possible. Then came the mysterious and ethereal Cloud, and the digital game changed yet again. Suddenly, physical storage devices were going the way of the dinosaurs and information and media started to live in the ether, mere ghosts consisting of ones and zeros. Technology seems to be in a state of constant flux, as well it should be if it is to remain the faithful servant of Mankind’s diverse needs.
But, in 2009, the world of access automation was in need of a hero. Despite some groundbreaking innovations such as battery backup and rolling code technology, it had not yet fully caught up with the evolution that was sweeping through the technosphere. But the winds of change were about to reach the security sector, and their arrival signaled the birth of a true access automation legend. 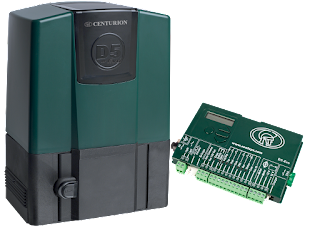 The D5-Evo built upon the equally legendary foundation of its predecessor, the original D5 – an access automationstaple if ever there was one – incorporating the same tried and tested mechanical design. CENTURION marketing and sales director Richard Rohmanexplains some of the thinking that went into the design of the original D5sliding gate motor:
“When we were developing the D5, we looked at the beautifully-moulded and machined Italian operators that were, at the time, hammering some old tin box-looking operators at every turn. But we were worried about our ability to die-cast the gearbox as well as the out-of-mould machining still needed to be done. It was for this reason that the injection moulders across the road from us at the time suggested we try producing a gearbox using the latest in injection mouldable engineering polymers. It worked and worked well, to the extent that it became the norm for all locally-produced gate motors in South Africa”.
However, it wasn’t all smooth sailing back in those early days, as Richard is quick to point out.
“Then came the quest to get rid of the horrible limit switches. Pat [Dickens, CENTURION MD] and I walked a long, hard road with this one, moving from traditional limit switches to optical limits and then back to really robust limit switches to finally our only locally-made limit switches, all of which were far too costly and cumbersome to install. Hence, the development of the DOSS (Digital Origin Seeking System), which is a story on its own”.
As the country’s security situation continued to deteriorate and it became increasingly necessary for homeowners to get into their properties as expeditiously as possible, speed became another critical consideration. The engineer overseeing the development of the original D5 was tasked with ensuring that the machine went no slower than a robust 16 metres per minute.
“[We] had to get clever with speed control on the D5,” Richard remembers, “because it was always a complaint with installers of competitor products that their faster machines weren’t very accurate when it came to stopping; when the motor reached its end-limit.”
This shortcoming prompted CENTURION’s design team, under the supervision of Ian “Roz” Rozowsky (who would later become the Research and Development director), to design the D5’s electronic controller – the now-famous CP80 – in such a way that smooth acceleration and deceleration could be achieved, a feature that was perfected with the D5-Evo.
The landscape at the time (around 1996) was somewhat desolate in terms of functionality, with the vast majority of gate motors on the market offering little more than simple opening and closing of their loads. However, the growing concerns around crime and home security led to a demand being created for more versatile, feature-rich gate operators, and this became a bit of an obsession for the CENTURION team.
According to Richard, they were always keen on giving the client more than they could wish for in terms of features.
“At the time, our competitors provided row upon row of dipswitches to allow the different features to be set, but these cost money and weren’t all that intuitive. So Roz developed the fancy menu system using a couple of LEDs and a pushbutton. It was very cost-effective and, once you had been shown what to do, fairly straightforward to use.”
Some 13 years later, the aptly-named D5-Evo (short for “evolution”) took the world of access automationby storm, packaging a plethora of incredible features – a number of them world firsts – into one compact, easy-to-use and remarkably intelligent LCD controller. The new machine finally ushered gate automation into the 21stcentury, marking a new era in domestic security. Not only did the D5-Evoaddress homeowners’ growing security concerns with innovative features such as the built-in Intruder-detection Alarm feature-set, but it also spoke to the needs of installers. The LCD interface made for supremely easy commissioning, while removable terminal strips and advanced diagnostics made maintenance a dream.
Today, some seven years after it first came onto the scene, the D5-Evo is showing no sign of slowing down, and seems to be holding on to its unofficial title of “South Africa’s favourite gate motor”.
Stay tuned for part 2 of our series on the birth of the D5-Evo, in which R & D director Robert Dickens – who was intimately involved in its design – provides a personal account of those exciting early days and traces the D5’s evolution in an exclusive interview. You don’t want to miss it!