The SupaHelix is this Summer’s Blockbuster

It has been said that every great artist has at least one true masterpiece; a single piece of work that transcends greatness and stands out as that artist’s proudest moment. Tolstoy’s gift to the world of literature was War and Peace, Orson Welles gave us the celluloid tour de force Citizen Kane (which he directed, co-wrote and starred in) and CENTURION…
We have SupaHelix.
SupaHelix is no independent made-for-television special, either; it’s a major production starring an ensemble cast of massive user memory, effortless administration, robust, interference-free remote learning and advanced diagnostics.   Critics are saying about SupaHelix ‘A triumph…’ ‘Two thumbs up…’ ‘A real game-changer…’ ‘This year’s best release…’
So what is it?
In a nutshell, SupaHelix is a comprehensive and highly advanced access control system for high-volume residential sites such as estates and townhouse complexes (I frequently refer to it as a ‘tenant administration toolkit’ to highlight its efficacy in this capacity, but in truth it is much, much more as will soon become apparent).
While this product was originally intended as an upgrade to the existing SupaNOVA complex receiver, it soon became obvious that the end-result would not be a mere sequel or even a remake (in keeping with the movie analogy). No, SupaHelix would be a reimagining. And that is exactly what it has turned out to be.
SupaHelix is as much ‘just a complex receiver’ as the Beatles were just four guys from Liverpool with disturbing haircuts. Capable of storing up to 10 000 individual remote buttons, SupaHelix puts a refreshing spin on user administration in that it allows bulk adding of remotes via an onboard USB port, and also allows each button to be assigned to individual groups and subgroups. This is a great feature for sites where there are numerous access-holders residing in the same unit.
The product also boasts two brand new high-security remote button learning modes, namely ‘Press for Three Seconds Learning’ and ‘Double Press Learning’, both intended to reduce the chance of accidental button learning which is somewhat of a problem in busy neighbourhoods. I’m all for neighbourly love, of course, but giving them access to your property might be taking the concept a little too far.

We’ve now touched on some of the marvellous features of the SupaHelix, and rest assured we’ll return to them in just a moment, but I’d like to bring your attention to the interface itself for a minute.

Just look at it: 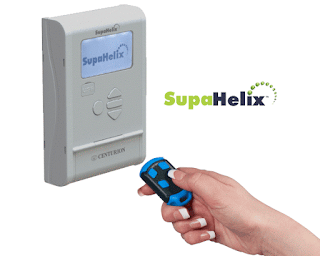 That’s one good looking piece of technology! Besides voluptuous modern curves, you’ll also notice the presence of a sizeable LCD screen and four navigational buttons.
It’s all about you: the installer and/or administrator. A graphical interface makes adding, editing and deleting users as intuitive as taking your next breath, while also lending itself to providing visual diagnostics of system health and making it possible to view detailed transaction logs line by line on the panel.
Right, back to the features (ha! That worked out pretty well for the whole movie theme we have going here). Unlike most contemporary complex receivers, the SupaHelix’s three channels can be configured as inputs as well as outputs, making it ideal as both a monitoring and control solution. As you probably know, outputs facilitate the activation of whatever electrical device is attached to it – for example an automated gate, light, pool pump, refrigerator, alarm system, sprinkler, etc. – while inputs are generally used for monitoring events such as a gate that has been left open, an alarm that has been activated, or even a fluid level.
It’s this summer’s blockbuster! Get yours today.