When a vehicle loop detector is billed as “ultra-sensitive”, you just know it’s going to be one sensitive loop detector. And if scores of romantic comedies starring the likes of Aaron Eckhart and Catherine Zeta Jones have taught us anything, it’s that sensitivity is a good thing (also, that scorned lovers will forgive all if the offending party just executes a well-times and dramatic speech, preferably at an airport).
Since, let’s face it, FLUX is an absolutely revolutionary vehicular access product, it has grown considerably in popularity since its release last year and is being used on more and more industrial sites – sites on which huge trucks with trailers of behemoth-like proportions constitute a large percentage of the daily traffic.
So, being quite sensitive ourselves, we decided we didn’t even want to risk a boom going “boom” on top of any of these trailers as a result of them not being detected. And thus, the new FLUX firmware effectively doubles the detection sensitivity levels of previous versions, making for a markedly reliable detection productthat will register metal objects at a level well above the ground. All newly manufactured units will come out of the box with the sensitivity level set to one setting below maximum (hint: that’s still high!).
To recap: The FLUX11 and FLUX OB loop detectors’ settings – easily configurable via a series of dipswitches – go from Low (or a “I’ll cry during The Notebook but nothing else” level of sensitivity) all the way to Super High (or a “I occasionally weep while watching wrestling on TV” level of sensitivity). The FLUX SA standalone loop detector can be set from Low to High.
The new firmware version numbers are as follows for the different models, and be downloaded from our website and bootloaded:
·         FLUX 11: v1.0.3
·         FLUX OB: v1.0.3
·         FLUX SA: v1.1.3 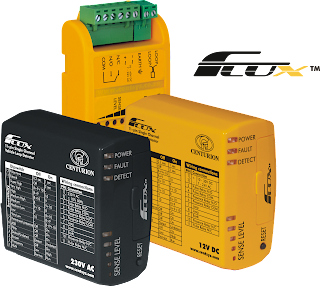